These are some of the simplest patterns you can find, comprising just one trading period. Often, they form the building blocks of longer patterns.

In a spinning top, there’s a tug of war between buyers and sellers. But the bears and bulls are cancelling each other out, so there’s little in the way of actual movement.

Technical traders take spinning tops as an indication of weakness in an ongoing trend. If a market forms a spinning top after a lengthy bull run, then positive sentiment may be running out. After a downtrend, meanwhile, bullish opinion may be gaining strength.

Marubozu
Marubozu comes from the Japanese word for ‘bald’. It means a candlestick that has no wick whatsoever.

If we visualise the movement within a green marubzuo, there’d be no price action above or below the open and close prices:

As you can see, this makes a bald green stick an indication of clear bullish sentiment. Bulls pushed the market’s price higher with little fightback from bears.

If this occurs as part of an uptrend, technical traders see it as a sign that the upward movement will continue. If it happens after a downtrend, a reversal may be on the cards.

Red marubozu, meanwhile, are the exact opposite. They tell you that bears were in almost total control of a session – and therefore that a downtrend could continue or an uptrend may reverse Marubozu comes from the Japanese word for ‘bald’. It means a candlestick that has no wick whatsoever.

DOJI
In a doji pattern, the open and close prices are exactly equal (or almost exactly equal). So the body appears as a very thin line – typically less than 5% of the total range of the period.

Like spinning tops, this can tell you that the bulls and bears have cancelled each other out by the end of the session.

There are four main types of doji to watch out for:

The four types of doji candlestick. From left to right: the long-legged doji, the gravestone doji, the dragonfly doji, and the four-price doji

Doji are often taken as an indication of an upcoming reversal. If a market forms a after an extensive uptrend, then it may be about to head back down. After a bear move, selling sentiment could be exhausted, meaning bulls are about to take over.

HAMMER
If a market forms a hammer after an extended move down, then technical traders believe that it might be about to mount a bullish fightback.

You can spot a hammer by its long wick below a comparatively short body, with little to no wick above. The body should be two to three times shorter than the lower wick.

This shows that the market hit a new low during the session, but bounced back and closed much higher. So while there was significant selling pressure, buyers stepped in to push back the bears before close.

While bearish sentiment is weakening, that doesn’t necessarily mean a reversal is imminent. So most technical traders will wait for a confirmation before opening a position on a hammer – usually a strong upward move in the next period

INVERTED HAMMER
Inverted hammers look exactly the same as hammers, just upside down. So there’s a comparatively short body underneath a high upper wick, with little range below.

They also appear after downtrends and are taken as a possible signal that a reversal is on the way. However, the price action within an inverted hammer is a little different.

The upper wick shows that buyers took control of the market within the session, but were met with resistance from the sellers. However, sellers were unable to push its price further down, meaning that bearish sentiment may be on the wane.

As with hammers, it’s best to wait for confirmation – usually in the form of a bullish candlestick immediately after – before opening a buy position.

HANGING MAN
A hanging man looks identical to a hammer, the only difference being where it crops up.

While a hammer appears after a bear market, a hanging man will do so after an uptrend. They’re taken as a sign that selling sentiment is growing against buyers, and therefore that a reversal may be coming soon.

Sellers had control of the market, but met strong resistance. However, that resistance only managed to keep the price in check, it didn’t continue the bull run. So sentiment may be about to swing.

A red hanging man is usually taken as a stronger signal than a green one – though both are considered bearish patterns.

SHOOTING STAR
A shooting star, meanwhile, is a doppelgänger of an inverted hammer. But like the hanging man, a shooting star will appear at the crest of an uptrend instead of the trough of a downtrend.

In a shooting star, the session starts with the bulls still in control. But bears take over, dragging the asset’s price back down.

Both indicate that a reversal may be imminent. But like the hammer, inverted hammer and hanging man, it’s often a good idea to wait for signs of a new bear market before trading.

When a signal is formed from two consecutive periods, it’s known as a double candlestick pattern. These often hint at upcoming trend reversals, but can also be used to identify continuations

ENGULFING
In the engulfing pattern, a candlestick is immediately followed by another larger one in the opposite direction.

In the bullish engulfing, a red candle is dwarfed by the green one that follows it. Technical traders might take this as a sign that positive opinion is taking hold, so a significant move up may be on the way – particularly if a bullish engulfing appears after a period of consolidation.
A bearish engulfing arises when a bullish stick is then swallowed by a subsequent bearish one. So negative opinion may be forming.

HARAMI
Harami is essentially a backwards engulfing pattern: a candlestick is followed by a much smaller one in the opposite direction.

The name harami comes from the Japanese for pregnant, because some believe that the pattern resembles a pregnant person.

In a bullish harami, a red candlestick is followed by a green one that is completely contained within the body of the previous candle. This is often taken as a sign that a downtrend may be ending.

In a bearish harami, the opposite happens: a green candle followed by a smaller red one. In both cases, the size of the second stick is used to determine the strength of the signal: the smaller the better.

If a harami is followed by a doji – the smallest possible candle body – then it’s known as a harami cross.

Homing pigeon
A bullish homing pigeon, meanwhile, looks similar to a harami – except that both candlesticks are red.

The second candle’s body is contained entirely within the first’s. This is taken as a sign that an uptrend may be about to commence.

Traders searching for homing pigeons will look for downtrends that are weakening or nearing a key point of support. Homing pigeons are considered less useful in highly volatile conditions.

Tweezers
In a tweezers pattern, two identical candlesticks in opposite directions appear after a bull or bear market. Tweezers are taken as a sign of an upcoming reversal.

The second candle is the opposite colour, but otherwise identical. So together, the two look like a pair of tweezers.

The longest patterns we’ll cover in this section are triples, which are made across 3 consecutive periods. Triple candlestick patterns are often seen as some of the strongest signals of an upcoming move.

A morning star plays out as a market hits a point of indecision after an extended downward movement, then begins to recover. It consist of 3 candlesticks:

> A red on with a large body which is part of the downtrend
> A candle with a short body, often a spinning top, indicating that bulls are entering into the session
> A green stick with a tall body confirming that a reversal has began 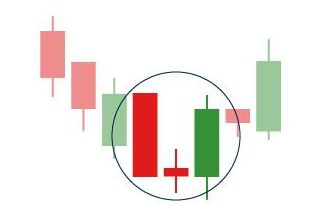 An evening star is the opposite of a morning star, showing a bull market that hits a point of indecision and then begins to retrace.

It looks the same as a morning star, but with a green candle at the beginning – after an extended uptrend – and a red one at the end.

Both evening and morning stars can be formed with a doji in the middle. This indicates a stronger period of indecision, and is sometimes taken as a sign that the subsequent move will be more pronounced. 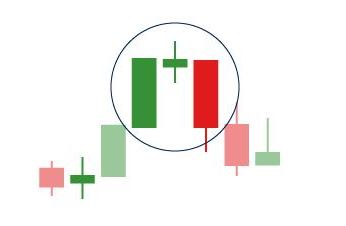 The three white soldiers pattern appears after an extended downtrend and small consolidation. Technical traders use it as one of the clearest signs that the bear market is over.

The three soldiers are: 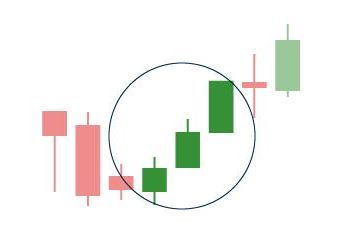 The three black crows pattern is the opposite of the three white soldiers. It appears after an uptrend, consists of three consecutively longer red candles and is taken as a strong signal that the bull market is over.

The second candle should have a short or non-existent lower wick, and the third should have close to no wick at all.

A technical trader may take the three black crows as an opportunity to open a short position to attempt to profit from the following bear run. 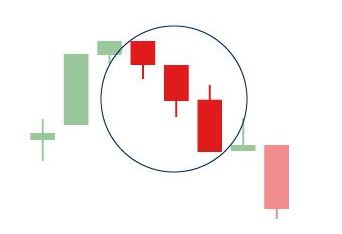 The three inside up pattern is another trend reversal indicator, appearing after a downtrend and signalling the beginning of a potential reversal.

The three candles in an inside up pattern are:
> A substantial red one that continues the previous downtrend
> A green stick with a body that closes at least halfway up the previous candle’s – so the market has recovered half of the last period’s losses
> A green candle that closes above the high of the first one

Buyers should now have overpowered sellers, arresting the market’s decline and possibly kicking off a new bull trend 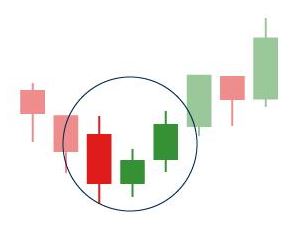 The three inside down is a reversed inside up. It consists of a long green candle, followed by a red candle that closes at least halfway down the one before. Then another red candlestick that closes below the low set by the first.

An example of the three inside down pattern

When a three inside down appears after a bull market, traders who watch for patterns might see an opportunity for a profitable short position. 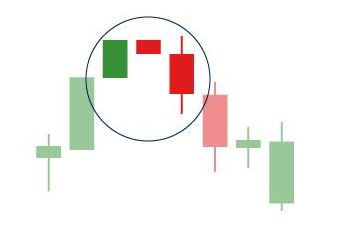 The rising three (or rising three methods) is a candlestick pattern that occurs within an uptrend, and is used to identify an impending continuation.

An example of the rising three pattern

The three sticks within a rising three all occur after a green candle with a large body. They are all typically bearish, and trade within the range set by the previous bullish candle. Here, the uptrend has paused while buyers wait to see whether sentiment is turning.

But after the rising three, another large green stick shows that the bull market is back on.