Welcome to The Bitcoin Forecast #022.

In my last forecast the on-chain setup was in a structure of sideways to bullish re-accumulation and recovery with no signs of a bear market. Since then the price has continued sideways sliding further bearish. Meanwhile the on-chain structure tells a different story.

Re-accumulation and recovery is still in play and is indeed strengthening, thereby creating a classic price to fundamentals divergence. In this letter while the fundamentals go largely unchanged from my last letter, I’ll take the time to break down the market setup in much greater detail.

Understanding of the current state of the market

> Macro cycle: The bull market is intact with user growth continuing to climb higher. Macro indicators continue bullish as per the prior 2 letters.

> Short and medium term (up to 2 months ahead): A classic divergence is underway. Long term investors are quietly absorbing coins unnoticed by the market. I expect this supply shock to squeeze the market upwards. I’ve not seen an opportunity like this since Q4 2020 when the network experienced a similar supply shock divergence unacknowledged by the market.

All forecasts are probabilistic with roughly 80% historical reliability for short time frame forecasts. Longer range forecasts are more reliable due to fundamentals prevailing over the long run, shorter time frames are subject to unpredictable events and the randomness of markets. Short term speculators should use appropriate risk management.

Understanding of the current state of the market

In Bitcoin bull markets the price will always pull back to test the resolve of new buyers, we call this “the shakeout of weak hands”:

The experienced investors tend to be well capitalised and their buying power easily bounces price upwards quickly. This results in a v-shaped price recovery like this. 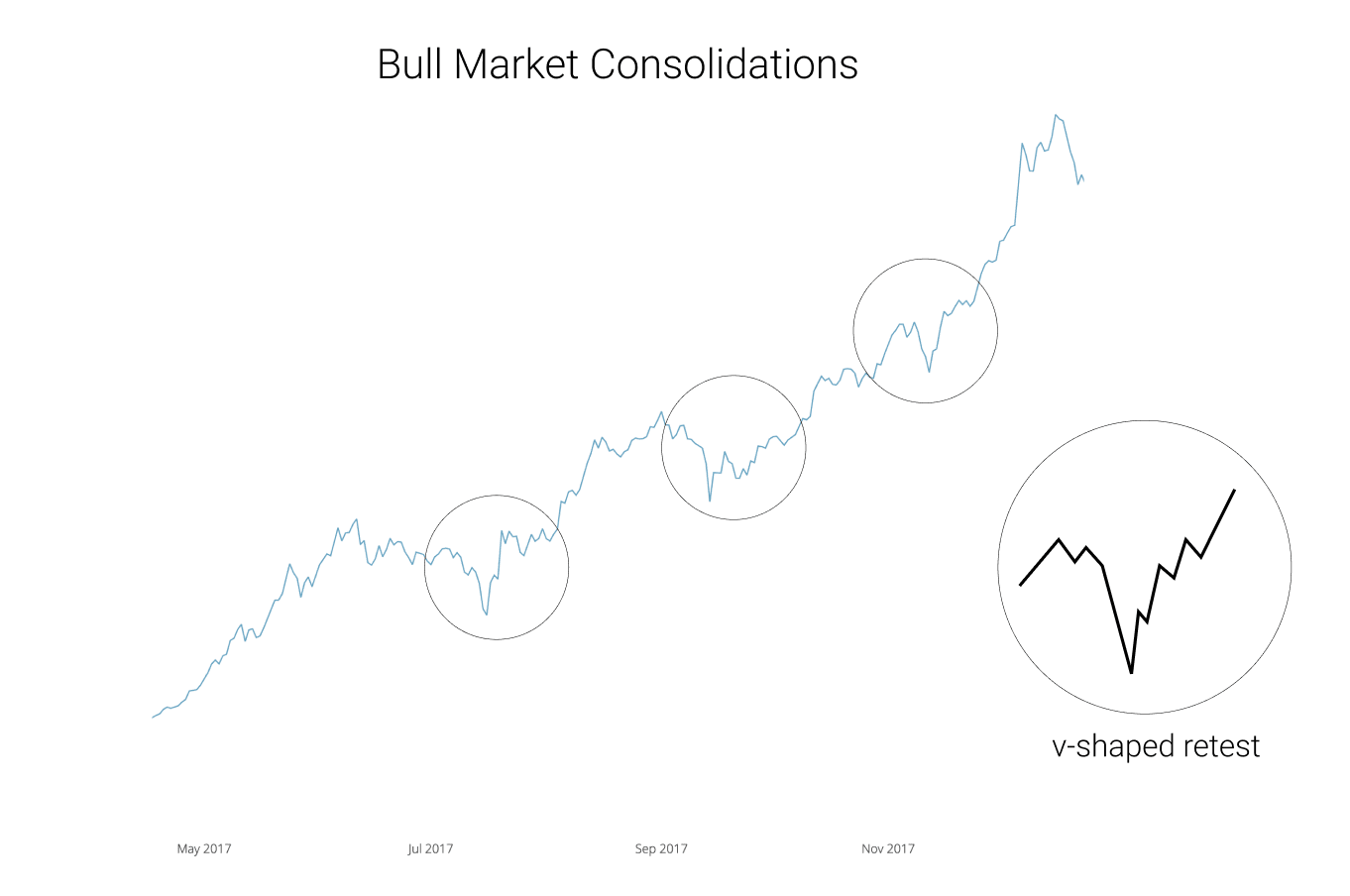 In circumstances when the shear size of selling is immense, a fast v-shaped recovery is not possible. Instead it takes time for the coins dumped onto the market to be re-accumulated. This results in a prolonged sideways band which we call an accumulation bottom.

We normally see this scale of selling at the end of bear markets, when maximum pain forces the last investors out right into the hands of smart money buyers stepping in to buy at the bottom at fire sale prices. 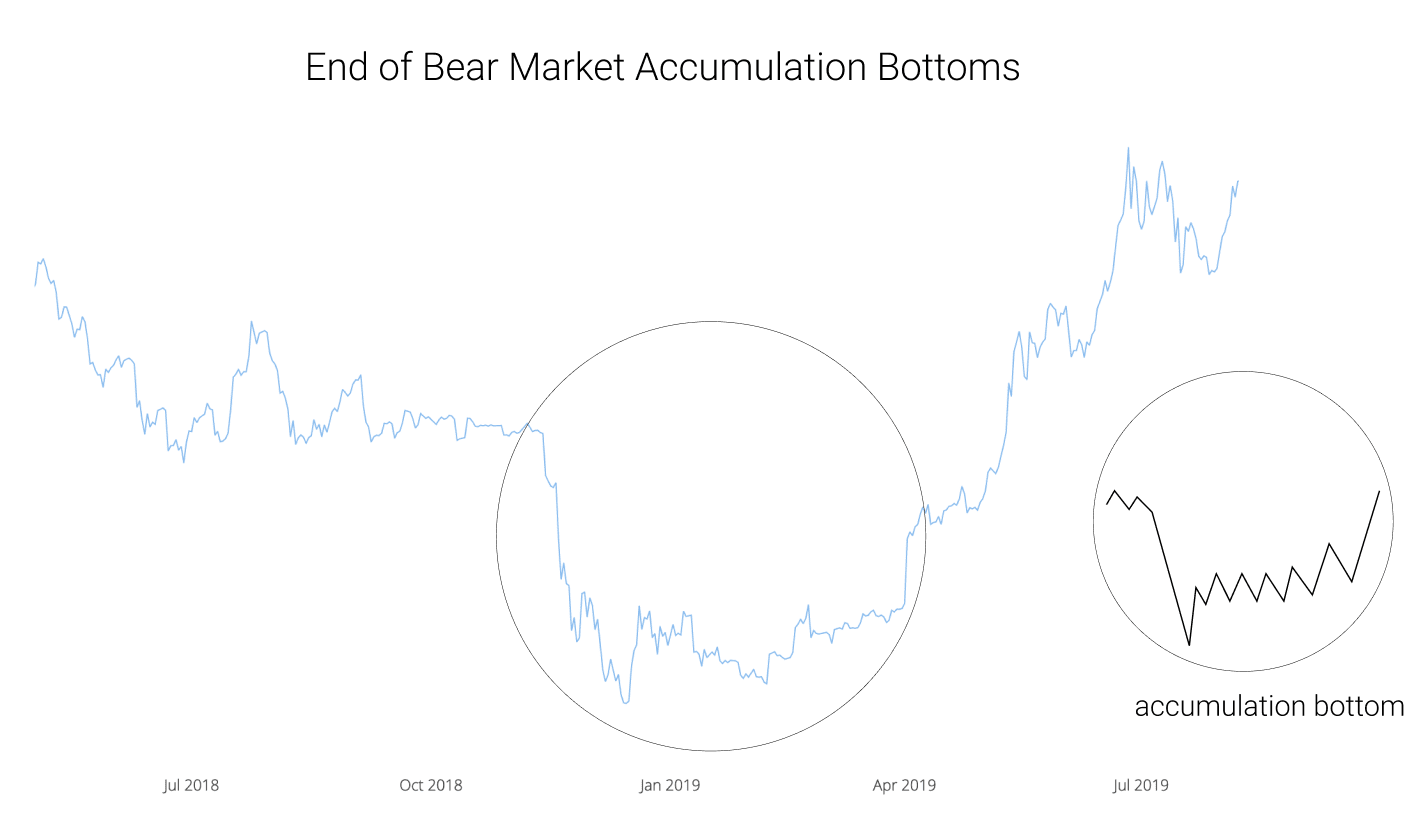 The current situation is very unique for a Bitcoin bull market in that the normal dynamic got flipped. The new participants that switched to selling were well funded speculative whales, while the buyers who have absorbed these coins have been less capitalised long term holders.

We collected an unprecedented number of new whales on the run up to $45k, their buying added fuel to the bullish price action, however by February these “speculative whales” have been profit-taking, dumping large amounts of coins onto the market. 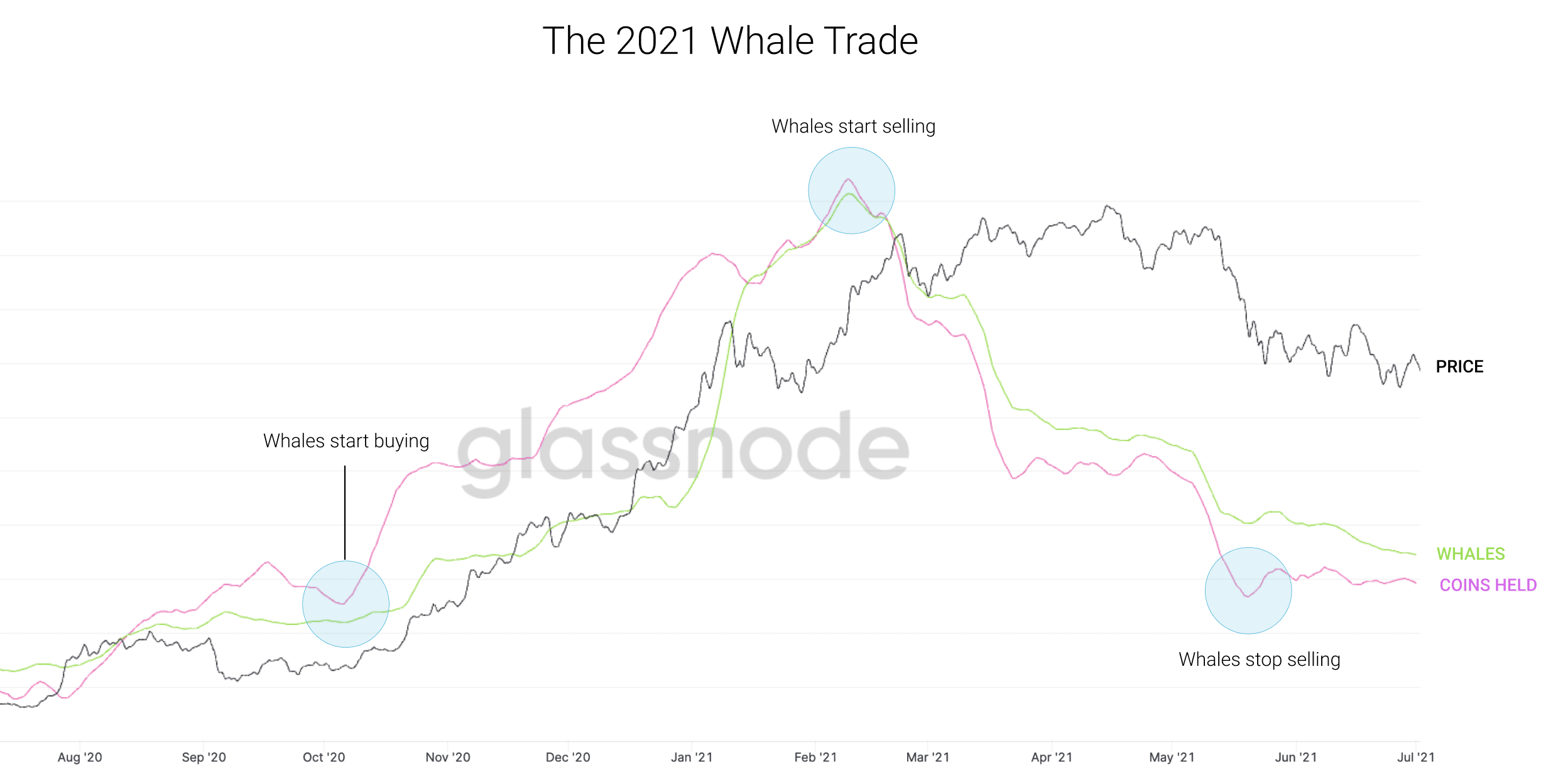 Whales have been buying Q4 2020 and selling during Q1 2021. Profiling the age of coins being moved, we can see the activity has been from movements of young coins, thus the most likely cause is from new speculative whales buying and selling.

By April the selling overran the normal bull market buying pressure causing a final influx of coins swamping exchanges to sell. The scale of the selling was the reason why I forecasted the possibility of a multi-month recovery in Forecast #19 (18th May). An accumulation bottom was on the cards rather than a v-shaped recovery. 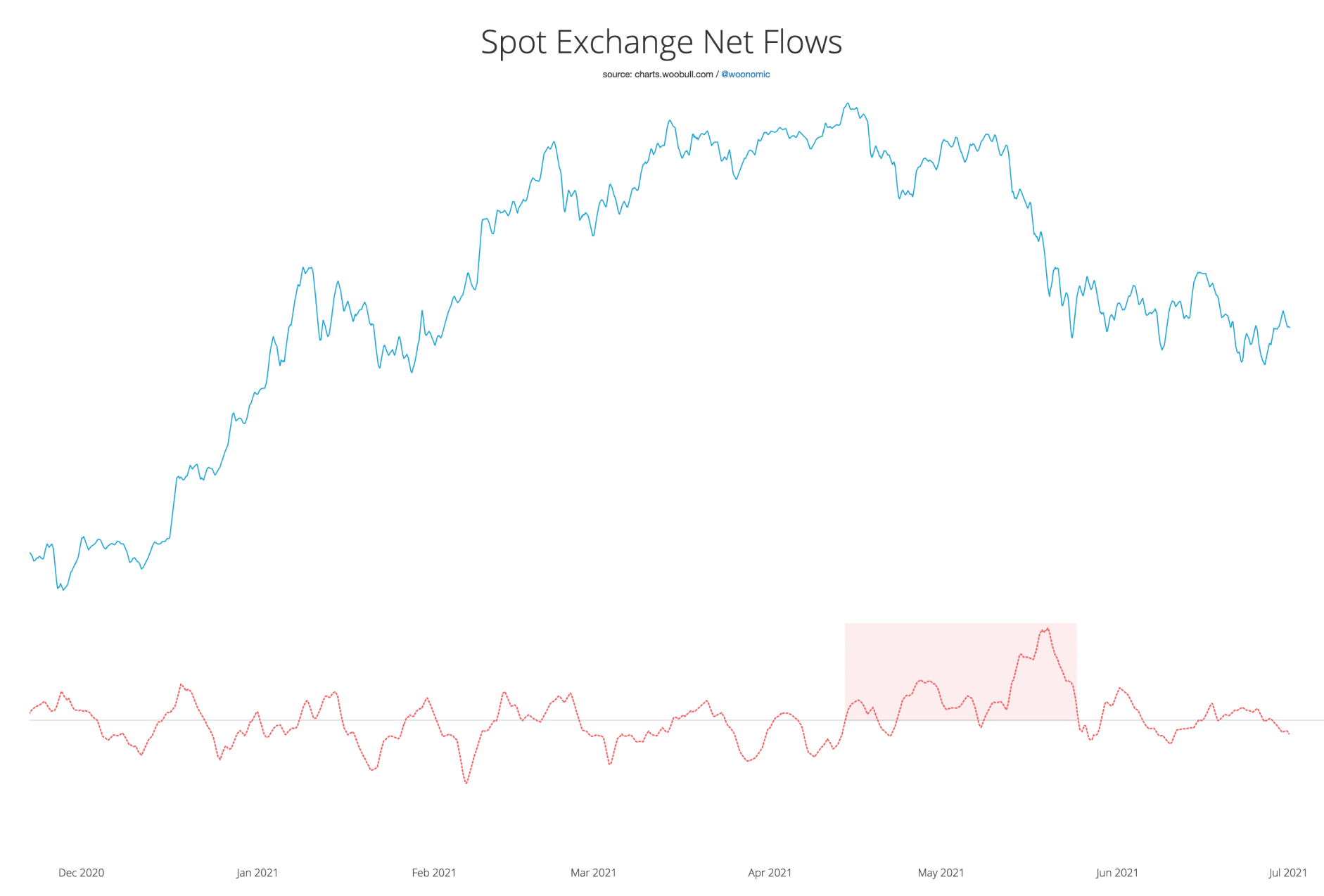 While the exchange flow chart above shows the sell-off has subsided, we really need to look at the quality of holders that the coins are moving to.

Our “Rick Astley” chart below shows the movement of coins between long term holders and speculative participants. 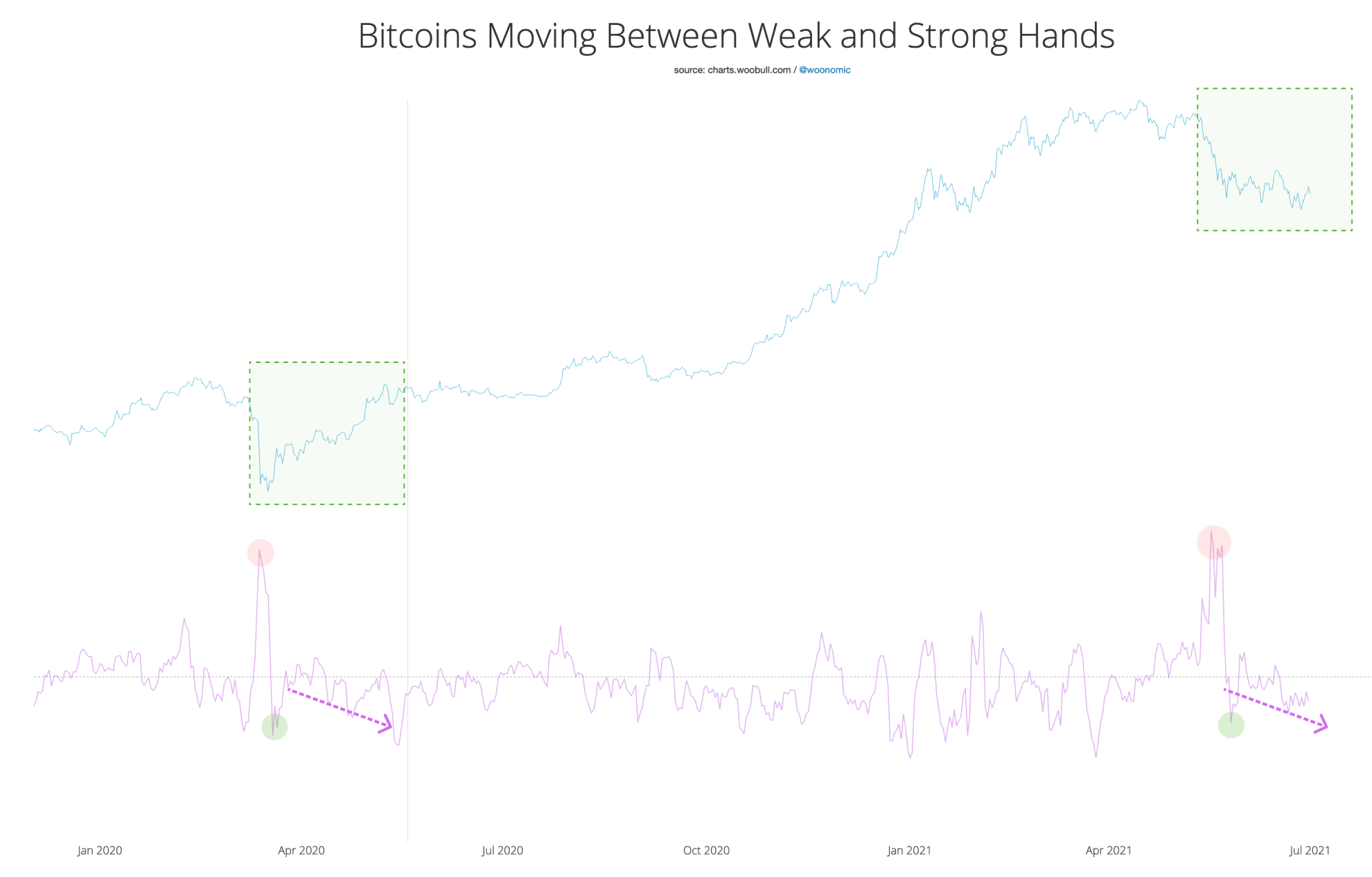 It’s very clear to see that long term holders are mopping up the speculative coins at a strong pace. It’s now a waiting game until this is reflected in the price action, the data is confidently pointing to an accumulation bottom forming.

While the on-chain structure has been pointing to a sideways bullish recovery, price action as NOT reflected this.

In my opinion this is made possible due to an increase of coins held by speculative hands who have been urgent sellers, while the long term buyers have been patient. Under technical analysis the price action looks scarily bearish to speculators and chartists are pointing to a further price collapse to $20k, claiming we are in a bear market. The fundamentals do not support this.

The on-chain picture is strikingly bullish. A supply shock is quietly forming unnoticed by the market. In the chart below I’ve remixed the “Rick Astley” data, this time showing the ratio of coins held by strong and weak hands.

The coins that were dumped by whales onto speculators are now being absorbed by long term holders. We are now at supply shock levels last seen when price was at $50k.

We seldom see these divergences where coins are removed from the market without price action reflecting this. It’s likely only a matter of time before the market figures out the coins are drying up. A great opportunity is at hand.

Here’s another view of the supply shock, this time based on the speculative inventory available on exchanges. 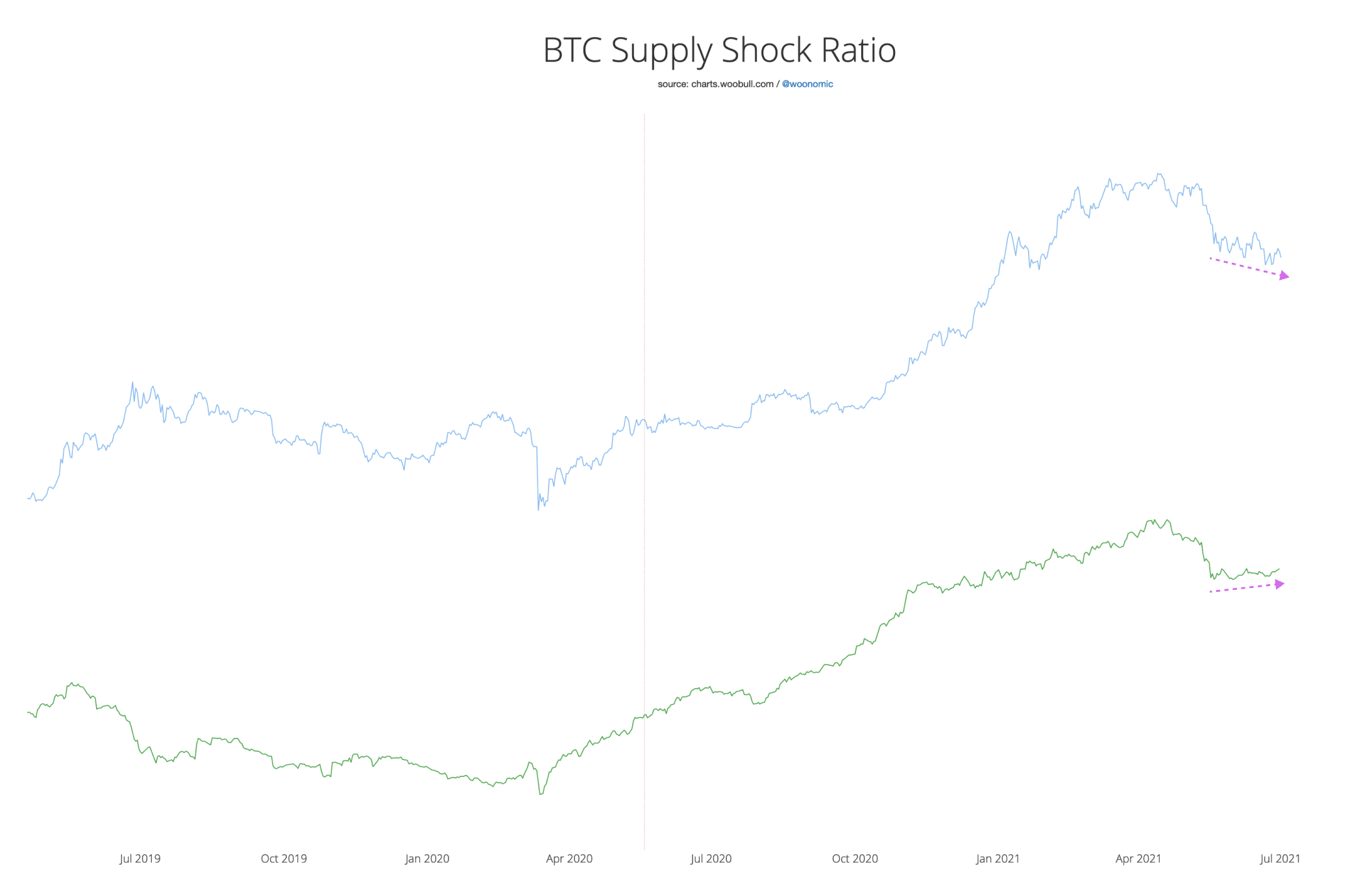 Supply Shock Ratio is the total coin supply divided by the coins available on exchanges. As coin availability on exchanges reduce in relation to the supply this contributes to increasing supply shock (green line increasing).

I’d note this particular supply shock is seen more clearly in the quality of holders (first chart) than with exchange inventory (second chart). Exchange inventory is commonly accessible to traders but it will be less insightful as this metric will drift as more retail investors come in during the mid stages of a bull market (which is what we are seeing now). Retail like to store their coins on exchanges.

It reminds me of the supply shock that went by unnoticed by the market in Q4 2020. Pundits were debating whether BTC was an inflation hedge in a post-COVID world when the data was pointing to long term investors stacking BTC at a fast pace. The price subsequently went on a tear, very quickly de-coupling from its tight correlation with stocks.

Network growth is at all-time-highs for 2021

Glassnode does a great job at clustering together wallet addresses into individual participants based on their historic interactions. From this data we can see the network is onboarding a healthy 32,000 new users per day which is a new high for 2021.

Entities Net Growth (2 week moving average). This is the number of new users joining the network minus the users leaving the network (emptying their wallets).

I’ve marked in red what happens at the start of a real bear market (the 2017 top); new users stop coming in, higher prices cannot be sustained. This is not the structure we are experiencing right now. New users are taking this opportunity to buy the dip, they’re coming in at the highest rate seen in 2021. Again, another example of on-chain data showing divergence to the price action.


ETFs are an alternative vehicle to gain exposure to Bitcoin via shares in a brokerage account. They are popular among long term traditional and also institutional investors.

The newly launched Canadian Purpose Bitcoin ETF has added 4100 BTC to its holdings during this dip, supporting what we see on-chain; long term investors are buying. 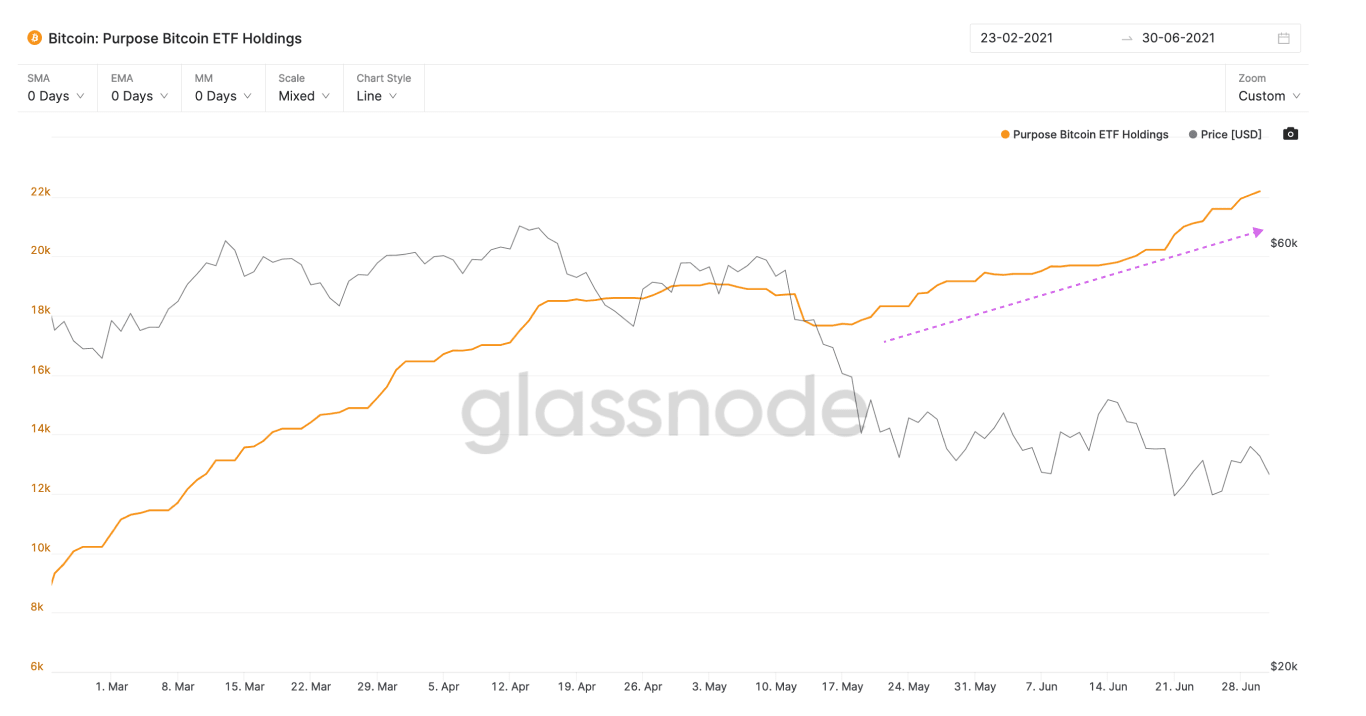 Now let’s take a look at Grayscale, the largest and most mature ETF with 3.5% of the entire Bitcoin supply under management. The Grayscale instrument is unique in that it does not reduce BTC holdings when shareholders sell, instead the price of shares sell at a discount to the BTC market. In effect we can determine buying and selling demand according to the Grayscale Premium. 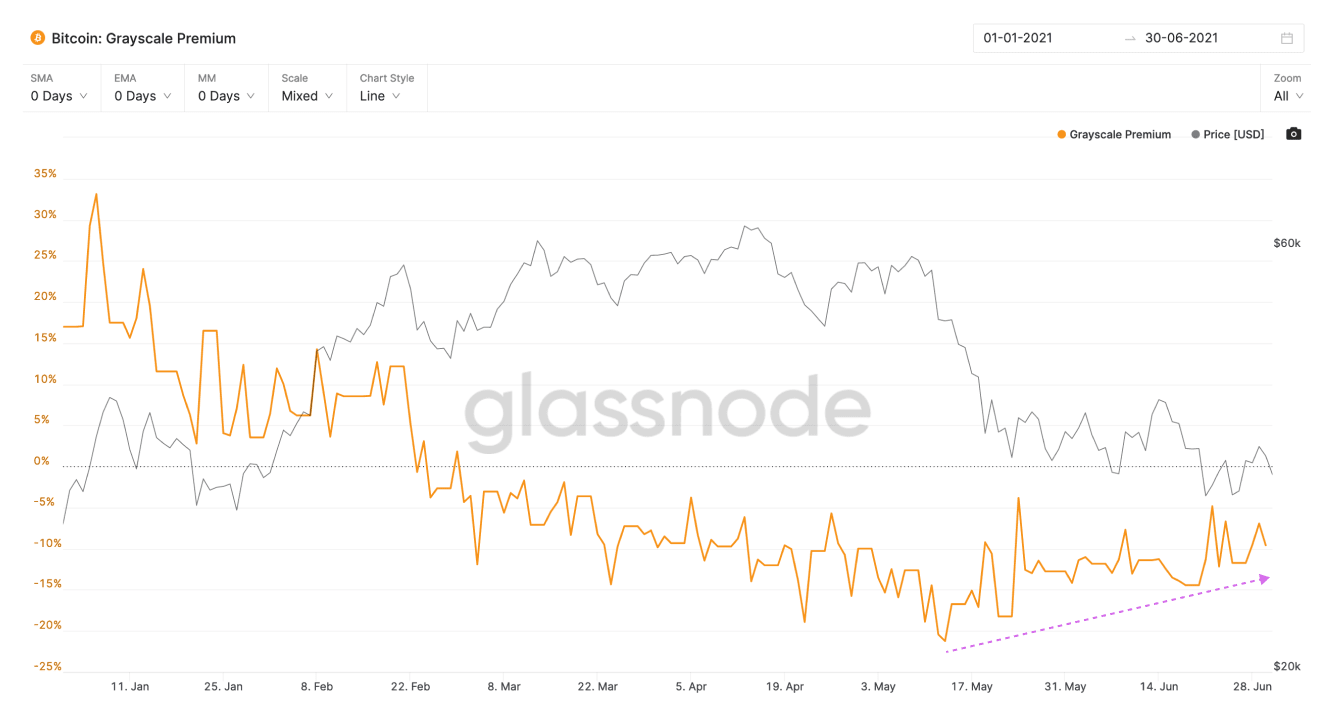 Grayscale investors sold their holdings starting in late February causing the premium to drop into a discount. During this dip the selling has reverted to buying, again presenting a divergence to the price action.

The great mining migration is underway

This letter would not be complete without comment on the great mining migration from China. Much of the short term bearish pressure on BTC price has been put down to China’s ban on BTC mining.

Since China hosted a large proportion of Bitcoin mining network, the ban effectively removes the last large area of centralisation on the Bitcoin network, thus it is long term bullish for the future of the network.

Short term however much of the hash rate has dropped from the network temporarily as mining hardware migrates to other locations throughout the world. Blocks processing has slowed as much as 3x the norm.

The network will compensate for this drop in hash rate today (at the time of writing) whereby the temporary network slow down will be mitigated. It’s expected to be the biggest down-shift in  difficulty the network has seen in its history. 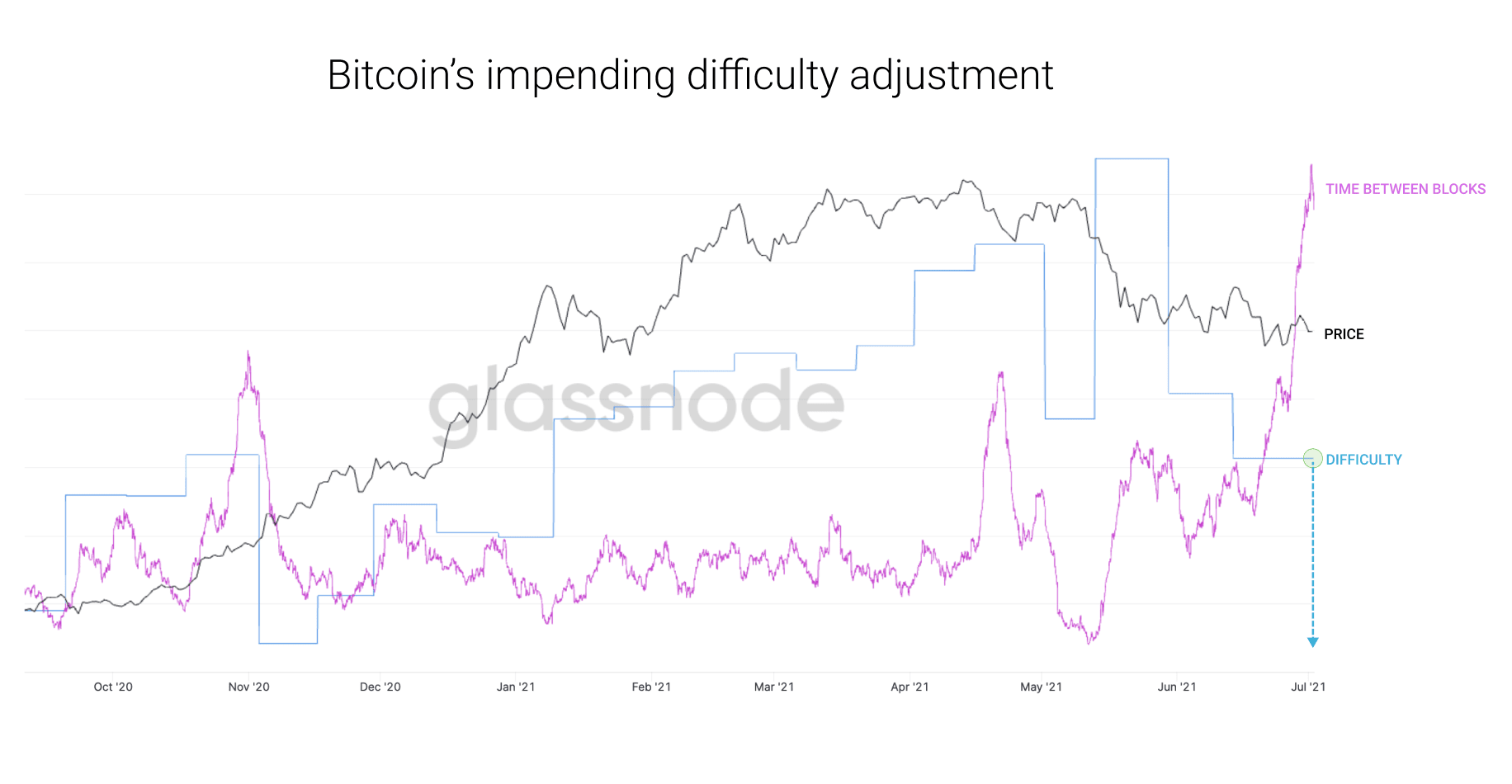 With this difficulty adjustment in place, it opens a window for price recovery and a price bottom.

This is effectively a miners capitulation. When miners are culled from the network, the surviving miners hold their coins knowing the sell pressure from miners that went out of business has subsided and a price floor is in place. We can see this effect visually as compressions in the Difficulty Ribbon. This has historically been a reliable signal for price bottoms. 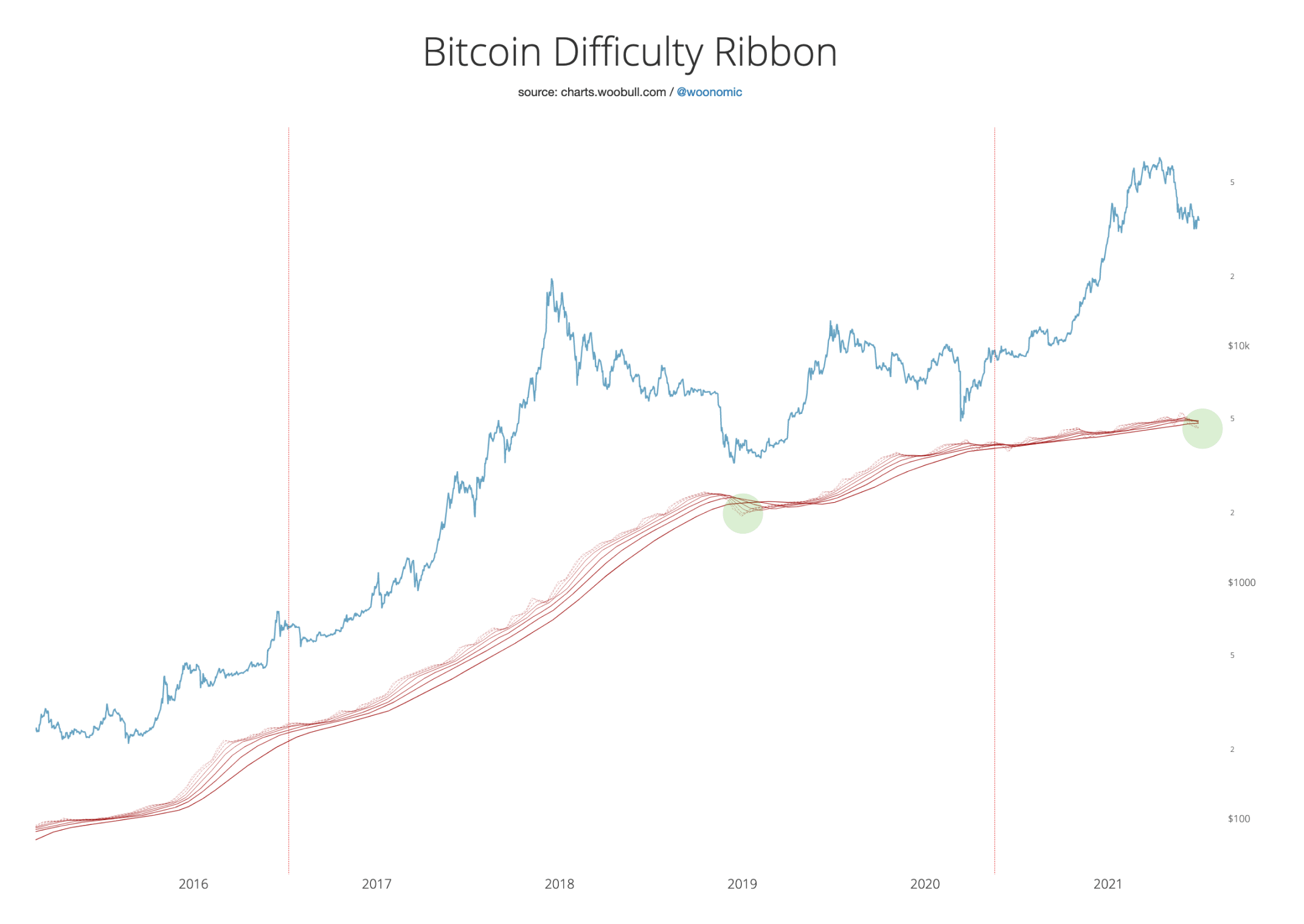